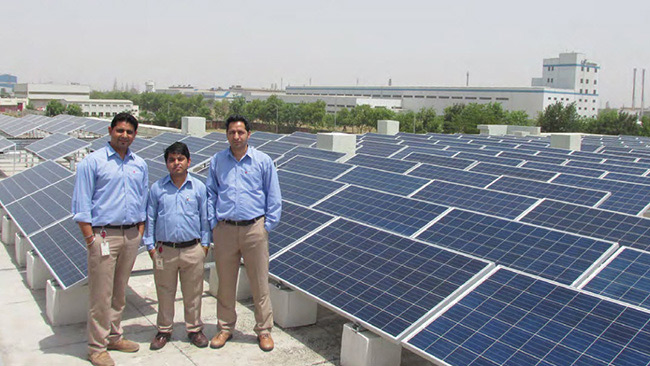 India has emerged as a world leader in promoting renewable energy development and tackling global climate change. Over the past decade in particular, the Ministry of New and Renewable Energy (MNRE) in New Delhi has developed ambitious goals for increasing access to clean energy sources. And through sustainable energy initiatives, the government of India has increased its efforts dramatically to develop and deploy new and renewable energy throughout the country.

In the state of Haryana, where the Hollister Incorporated plant is located, the state government requires that a minimum of 3% total energy usage must come from solar power. Hollister is working proactively to exceed that requirement substantially and is already one of the top three users – and producers – of solar power in Bawal.

Last year (2016), the Hollister Bawal plant initiated a ‘Go-Green’ solar project initiative, which is expected to provide 15% of the plant’s total energy requirements through an array of solar panels installed on the plant’s rooftop.

The Bawal engineering team installed the rooftop solar panels – ahead of schedule – in early 2017. Team members responsible for the installation included Madhu  Lakharwal, Bali Ram, and Vikas Sharma. “We anticipate that this solar initiative will not only reduce the plant’s overall carbon dioxide emissions,” says team member Vikas Sharma, “but that there will also be substantial cost savings in our future energy usage.”

From the beginning – a focus on the environment

The solar power initiative at the Bawal plant is just the most recent ‘green’ initiative at the plant. Even in the initial design phase – before construction of the plant began – the focus was on environmental impact and cost savings.

Green Building: From its inception, the Bawal plant was designed and constructed to be energy efficient. The building is fitted with angled and tinted glass windows to reflect sunlight and dissipate heat from the sun. The exterior west-facing wall of the building is double-thickness insulated brick.  The roof is not only insulated, but also includes UV resistant waterproofing.

Wastewater Recycling: The plant’s wastewater is recycled through an on-site sewage treatment plant. The recycled water is used in gardening and landscaping at the plant.

Additional Water Conservation: Low-flow water fixtures, together with toilets and urinals with hydronic sensors, reduce water consumption by more than 50%.

Building Lighting: The entire plant is fitted with LED lighting, which consumes one-third the electricity of conventional lightbulbs.

Eco-friendly Captive Power: The Bawal plant was designed from the outset with ‘captive power’ diesel generators to ensure uninterrupted power at the plant even if there is a local power failure. The diesel generators are eco-friendly and silent, and meet all local environmental regulations.