Kindred Box Has a Heart for Those in Need

Read how the program supports those in challenging circumstances with free and discounted ostomy supplies. 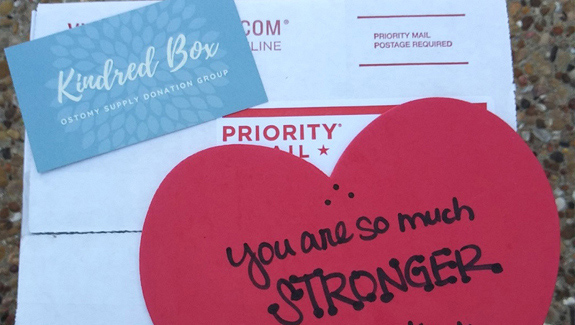 Learn how Kindred Box improves the lives of people with ostomies

Kindred Box is a nonprofit organization in the United States dedicated to improving the lives of people with ostomies. Since 2017, they have been collecting donations for programs that provide free ostomy supplies to US military veterans and for disaster relief assistance.

They also offer low-cost ostomy supplies to those who are faced with challenging circumstances, such as living in a low-income household or being uninsured.

“Many are fortunate to have excess supplies, yet others don’t have any. Making this connection is very important to our mission,” noted Christine Kim, the founder of Kindred Box. “When we first started out, we were sending supplies to a few dozen people. Just two years later that number grew significantly—by word of mouth.”

Christine indicated that Kindred Box has over 200 people on their list who request supplies on a regular basis, and she expects that number to double in 2020.

A big need for ostomy supplies

You may be surprised to learn that some people in America with an ostomy do not have proper medical supplies. And you may be thinking: Why don’t they have supplies? What do they use? Christine has connected with many people who are struggling to pay out-of-pocket for ostomy supplies, including Jessica from New York who was down to only one pouch because she was waiting on her insurance to approve an order from a supplier.

“If help didn’t come fast, Jessica said that baggies and tape was how she’d get by,” Christine said. “She couldn’t afford the expense of paying retail for ostomy supplies and said depression was hitting her hard.”

Unfortunately, Jessica’s situation is more common than you might think. Waiting weeks, even months, for insurance approval is the main reason for a short-term need of ostomy supplies, but there are other reasons which are long-term or lifelong:

Christina from Virginia contacted Kindred Box after her son Zachary had ileostomy surgery because of Crohn’s disease. They’d been using samples from the manufacturers but when those ran out, she couldn’t afford to pay out-of-pocket for his supplies. Not only were they drowning in medical debt, but when Christina’s husband lost his job, the family lost their insurance.

Thankfully, she came across Kindred Box and reached out for help. About a week later the box arrived and Christina shared her gratitude on their Facebook page: “My son was down to his last bag and we so needed these ostomy supplies for him. Thank you so much. One less stress to worry about.”

Christine credits the kindness of many for the reason Kindred Box has been able to help so many people year after year. “We would simply not exist today if it weren’t for people who generously donated to help those in need,” she said. There’s even a page on their website devoted to “thank you” notes from recipients who have received donated supplies from Kindred Box.

For example, “I’m a US Air Force veteran in need of colostomy supplies. It means the world to me that people who don’t even know me donate to Kindred Box so these ostomy supplies can be sent to me. I am so thankful!” – Kelly E.

Kindred Box gives people living with an ostomy a new lease on life. With the option of affordable ostomy supplies, they can leave the house, they can work, they can simply get back to living. More importantly, they can find a little joy knowing that someone cares.