Job Sonke Wins Logistics Manager of the Year in the Netherlands 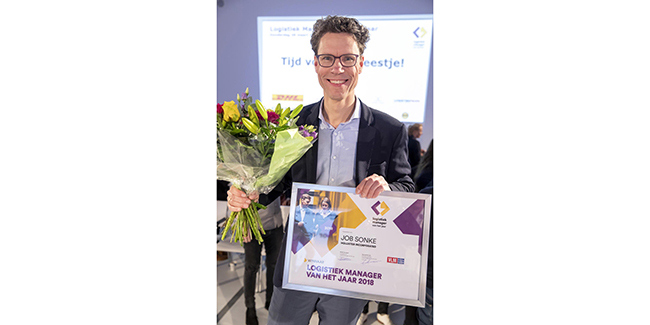 Job was honored at a reception on March 28 where he presented to a panel of esteemed logistical experts. He was judged on his role in the opening of the new Hollister Incorporated distribution center in 2018 in Roosendaal, and his coaching and leadership skills. In addition to the presentation, the panel of judges visited Roosendaal to see Job in his working environment and experience the new Distribution Center.

Click here to watch a video about Job’s nomination.

"Job is a logistics manager, but actually much more than that," says jury chairman Sander de Leeuw. "He has set up a whole new distribution center and moved the whole operation a few years later. That all the staff went to the new location, says enough about the attention that Job has for the human factor."

He joined Hollister in 2007 to establish and then manage the Hollister European Distribution facility in Etten-Leur. During the following years Job successfully expanded the scope of the logistics activities in this facility. In 2017 and 2018, he managed the transition to the new European Distribution Center in Roosendaal. And in late 2018, all associates, equipment and products moved to a new building of 30,000 square meters in Oud Gastel.

“I’m very honored to be recognized by fellow logistic experts for my contribution to logistics in the Netherlands over the last 25 years. I’m also very grateful to Hollister for providing the opportunity to further develop myself over the last 12 years,” shared Job.

“Huge achievement by Job. This award is highly regarded and puts Hollister on the logistics map in the Netherlands and will assist us in hiring the best people into the future,” said Hugh Berry, Senior Manager EMEA Logistics.