The Choice is Yours!

When Brenda Elsagher had colorectal surgery at age 39, she made some choices about how she would live life with an ostomy. 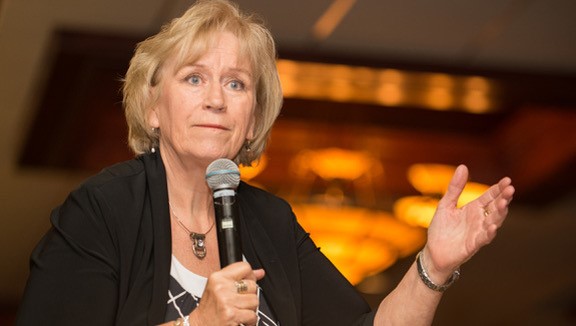 Read Brenda’s story about how choosing to be positive, public, lighthearted, and vocal helps her live well with an ostomy – and save lives.

After I was diagnosed with colorectal cancer in October of 1995, I made some important choices.

Finding out that I would need a big operation that would require a permanent colostomy, vaginal reconstruction, and a hysterectomy was a day wrecker. I was 39 years old, married six years, and had two children ages three and five. I was lucky in that I had never had bowel problems, like so many people who suffer greatly with Crohn’s disease and ulcerative colitis. I had a two-week pain in my butt that would not go away, even with medicated cooling pads and hemorrhoid ointment. In those years, I owned a busy hair salon and hardly had time to notice the pain, but eventually I couldn’t ignore it. I thought I just had a hemorrhoid problem, but it was much worse than that.

I chose to be as positive as possible

The day I was diagnosed with colon cancer, the doctor explained the surgery to me, and said it would be necessary to save my life. At first, I cried a lot. The next day at work, I found myself laughing and felt a little better. Then, I chose to be as positive as possible; I wanted to see my children grow up. Over the next three weeks, I had 10 different rectal and vaginal exams. I had things photographed that I never even knew about! I was quickly getting educated on body parts that I had taken for granted. I learned that my tumor may have started growing 10 years earlier, and that the only thing that would have detected it was a colonoscopy – a procedure that isn’t recommended until age 50. They told me I was one in 100,000. I once won $5.00 on a scratch-off lottery ticket, so that was the closest I came to defeating the odds prior to this day.

I chose to be public about what I was going through

In the three weeks before my surgery, I started sharing my story with clients, family members, and friends. I made a choice to be public about what I was going through, in case it might help someone else. In the hospital, I met with the Wound, Ostomy and Continence Nurse (WOCN). She “tattooed” where the ostomy was going to be and asked if I had any questions. I hesitated, then asked, “Where do the farts go?” She answered, “Flatulence goes into the pouch.” I quickly figured out that meant gas goes into the bag!

I chose to notice what was funny

The next important test I had was a CAT scan. A young nurse hooked me up with an IV and after the test was complete, an older nurse unhooked me and told me a story. “Last week there was a guy in here,” she said. “The young nurse hooked him up and when I came in to unhook him he said, ‘I knew I was in there a long time but this is ridiculous!’” I started laughing and realized humor was exactly what I needed, and I made a choice to notice the funny around me.

After surgery, I was in intensive care with all kinds of wires coming out of me. As I was waking up, my husband leaned in closely, and I knew he was going to say something sweet because he loves me so much. But he said, “Brenda honey, right now you look like the back of my stereo system!” Well that was so stupid it made me laugh!

Later, as I was transferred to the regular floor, the nurse pushing my wheelchair from behind stopped, patted my shoulder and asked, “Are your privates clean?” I stammered, ”uh, uh..” and then she said, “Oh sorry, I’m not talking to you! I’m asking a nurse at the end of the hall if any of the private rooms are clean.” We both got a laugh out of that misunderstanding.

I chose to be vocal about having an ostomy

Eventually, I made a choice to tell even more people that I had an ostomy because I thought it might save another. I never set out to become a comedian, an author, or an international speaker. I was happy being a hairstylist. But I often joke that when my rectum was removed, it left more room for creativity. You don’t have to be vocal about having an ostomy, but it sure worked out for me. The best part is when people tell me that my urging them to get a colonoscopy saved their life. My job is done!

Brenda Elsagher has been living well with a colostomy for 25 years. She is a comic, and international speaker, and the author of five books. Check out her website: livingandlaughing.com.

Financial Disclosure: Brenda received compensation from Hollister Incorporated for her contribution to this eNewsletter.